Home/IWPR/Year in Review: IWPR’s Top 10 Findings of 2016
Previous Next

It has been a busy, surprising couple of months at IWPR, but our research continues to inform public dialogue and tangible policy change. Just last week, DC passed one of the most progressive paid leave laws in the country – a hard-fought win for local and national paid leave organizers. IWPR’s paid leave simulation model analyzed a previous version of the bill and found that providing paid leave in DC is affordable policy with economic, social, and health benefits. Read IWPR’s testimony before the DC City Council and IWPR President Heidi Hartmann’s letter in The Washington Post and blog on Huffington Post for more on why paid leave in DC and beyond would be more affordable than opponents warn.

Below are our Top 10 findings from the year and a sampling of the impact of our research so far. The work continues in 2017!

In advance of Latinas Equal Pay Day on November 1, IWPR released projections for equal pay by race and ethnicity. The exceptionally slow pace of progress for Hispanic women is nearly two centuries behind when White women should expect to see equal pay with White men (2056). Black women are not projected see equal pay until 2124. Previous IWPR analysis found that women overall will not see equal pay until 2059. Read coverage of IWPR’s findings on trends in earnings for women of color in Glamour , ThinkProgress , Huffington Post, and TIME.

#2. Equal pay would cut poverty by more than half for working women in 28 states and the nation overall.

California’s working women would have earned $51.8 billion more dollars with equal pay, an earnings increase that, by itself, is greater than the entire economy of South Dakota ($45.9 billion). 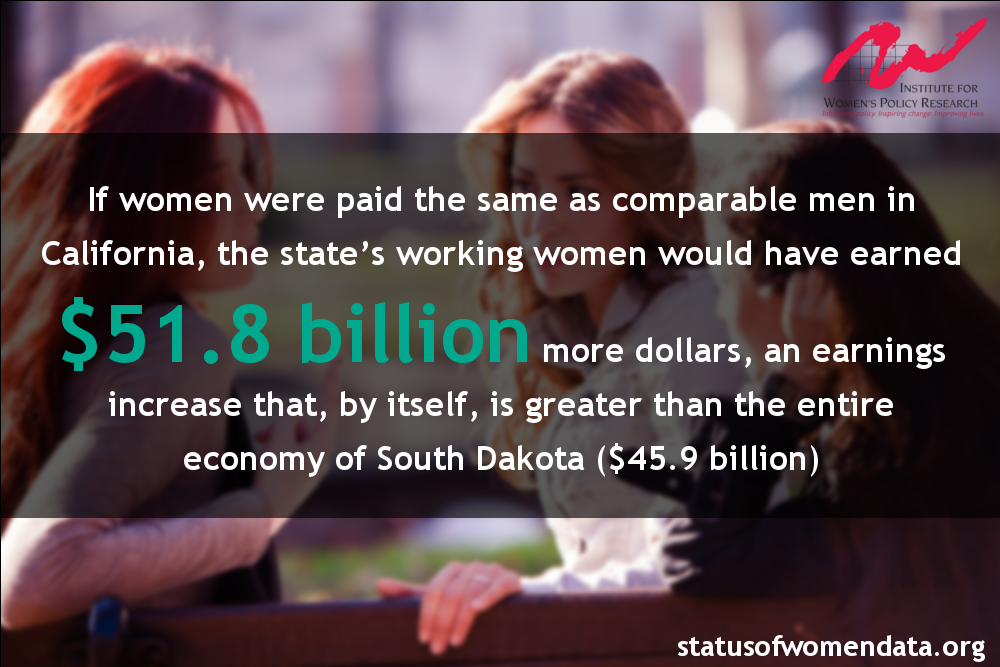 Undervalued and Underpaid in America, a recent study by IWPR and Oxfam America finds that workers in growing, low-wage, female-dominated jobs—who are disproportionately women of color—earn less than men working in similar jobs. For instance, maids and housekeepers, who earn $9.94 per hour, are 90 percent female, while janitors, who are mostly men, earn 22 percent more, at $12.13 per hour. Read the coverage in MarketWatch, Fortune, and New York Magazine.

#4. Women account for only 1 in 3 workers in good, growing, middle-skill occupations.

IWPR’s Pathways to Equity initiative and new interactive website, womenandgoodjobs.org, aim to show how improving women’s access to good middle-skill jobs can help close the wage gap and improve women’s economic security, while also filling skills shortages in manufacturing, information technology, and transportation (where women average only 11 percent of the incumbents of growing, middle skilled jobs). The analysis finds that many women work in jobs that already have a similar skill profile to better paying, male-dominated jobs—jobs that employers report are facing skills shortages. IWPR’s Heidi Hartmann and JP Morgan Chase’s Chauncy Lennon delve into what the findings mean for closing the gender and skills gap in an op-ed for U.S. News & World Report. Read more about the findings in MarketWatch, BloombergBusiness, IndustryWeek, Vox, The New York Times, and Pacific Standard. 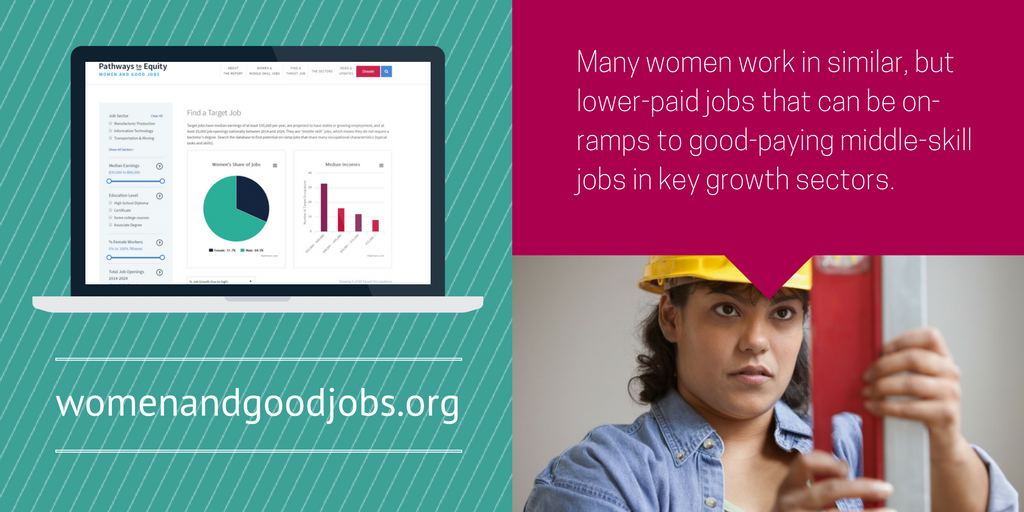 #5. Supportive services, such as child care, are key to success for parents in college or job training programs, but lack of funding means child care is out of reach for many.

Impact on Higher Education: In 36 states around the country, availability of on-campus child care actually declined in the last decade. IWPR’s state-by-state and national analysis finds that many states have rules, such as work requirements, that make it difficult for students to get child care subsidies. IWPR’s findings were featured in The Washington Post, The Atlantic, Slate, New York Magazine, MarketWatch, The Hechinger Report, and NPR, since the briefing paper’s release in September. Watch a Chronicle for Higher Education video interview with IWPR’s Barbara Gault on the challenges facing low-income female students.

Impact on Workforce Development Programs: New IWPR survey results reveal that 97 percent of job training administrators, including those based at community colleges, say that supportive services—such as child care, housing, emergency cash, and transportation assistance—are key to helping participants complete job or skills training programs, but programs lack funding to offer enough services to meet demand. As one administrator responded, “Supportive services are critical. All of the training and job placement efforts in the world aren’t going to be effective if the trainee can’t get to/from work, doesn’t have child care resources, or can’t overcome other barriers to getting and keeping the job.” 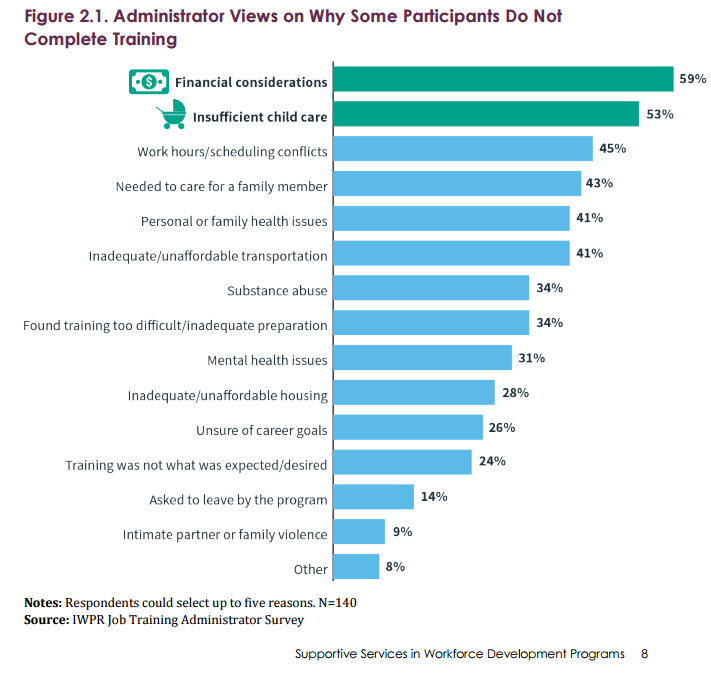 #6. Native American women saw the largest declines in wages over the last decade, with their earnings falling more than three times as much as women overall.

Black and Hispanic women also saw wages decline around three times as much as women overall in the last decade. As half of American families with young children have a breadwinner mother, women’s earnings are important for families. An IWPR analysis of breadwinner mothers by race/ethnicity found that the majority of Black, Native American, and Hispanic breadwinner moms are single and raising a family on their own, while the majority of White and Asian/Pacific Islander breadwinner mothers are married. See coverage of the findings in New York Magazine, Slate, and Ebony, and watch the HuffPost Live chat (with nearly 23,000 views) with IWPR’s Julie Anderson. (Read the series of quick figures to get state-level data on each.)

#7. At the current rate, women inventors will not reach parity in patenting until 2092.

Only 8 percent of patents have a woman as the primary inventor. See coverage of IWPR’s briefing paper and full report on the gender gap in patenting in Fast Company, Bloomberg, The Nation, The Atlantic, and The Hill.

“In the years ahead, we will need to tap the brainpower of top innovators around the world to meet persistent and emerging challenges, such as climate change, cyber security, the need to modernize public benefits access, and much more. Diversity in innovation is essential to social progress.” – Barbara Gault, Ph.D., Vice President and Executive Director of IWPR

#9. The Pacific West is the most broadly diverse region in the country, according to a new measure of regional demographic diversity developed by IWPR.

The new measure scores each region based on the number of women from each racial and ethnic group, rather than on the concentration of the non-White population as a whole.

As The Atlantic’s CityLab notes in its coverage of the findings,

“Only when lawmakers gain a detailed understanding of who the most vulnerable women are and what specific problems they face can they create an environment where all women thrive.”

IWPR President Heidi Hartmann told CityLab, “We need to understand that diversity is a nuanced concept, with tremendous variation, so that we can target policy solutions and make sure no group slips through the cracks.” 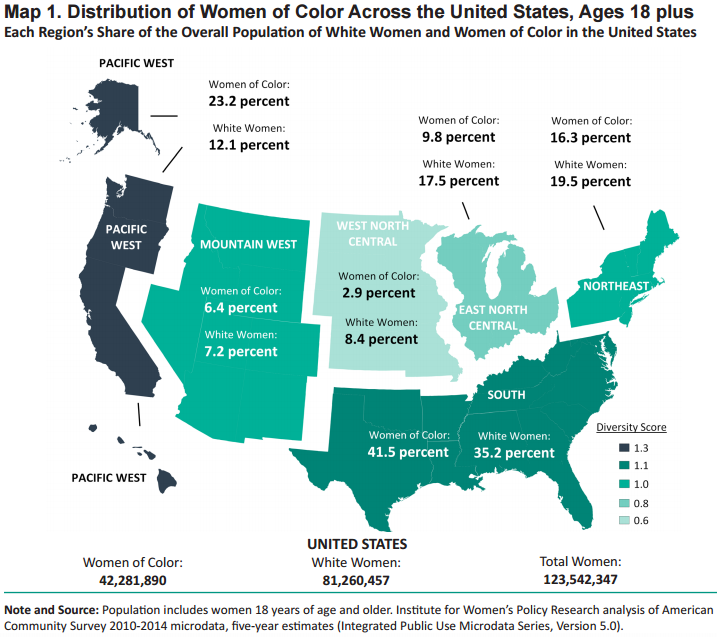 IWPR’s new chartbook, “High School Girls and Violence 2015,” highlights the alarming prevalence of violence against teenage girls, with differences by race and ethnicity. Hispanic teen girls are twice as likely as their male counterparts to experience sexual violence and Black teen girls are 1.5 times as likely. Another briefing paper, “Intersections of Domestic Violence and Economic Security,” reviews available social science and policy research on the economic impact of domestic violence.