In 2010, IWPR conducted the first national survey that asked workers whether there were policies at their work places that discouraged or prohibited sharing information about pay. On the Books, Off the Record: Examining the Effectiveness of Pay Secrecy Laws in the U.S. updates the results of the original IWPR survey using data collected in 2017/2018. Findings suggest that little changed from 2010, despite more than a dozen states plus the District of Columbia having adopted anti-secrecy legislation.

More women than men are pushing back against pay secrecy rules despite potential adverse consequences, underscoring women’s dissatisfaction with the status quo. On the 12th anniversary of the Lilly Ledbetter Fair Pay Act, IWPR looks forward to ensuring equal pay a priority of the new Administration.

Public-sector workers and unionized workers are much less likely to be subject to pay secrecy policies. Strengthening workers’ rights to unionize and supporting investment in public-sector jobs would be particularly effective in increasing pay transparency as well as improving pay equity. 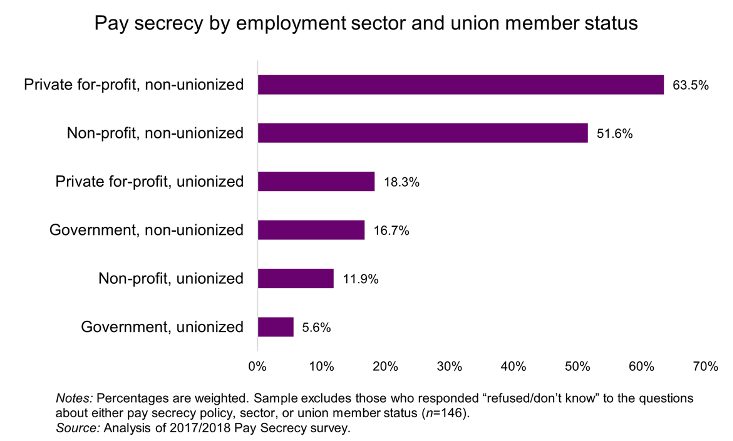 “Improving pay transparency has been a focus of recent state-level legislative efforts to eradicate the long-standing gender pay gap. The fact that still so many workers report not being free to discuss pay without fear of retaliation shows that more needs to be done. There needs to be stronger law enforcement, and making sure that workers know about their rights and that employers know about their legal obligations,” says Shengwei Sun, Ph.D., leading author of the policy brief.

“As we rebuild the economy from the devastation of COVID-19, we cannot deprioritize women’s right to equal pay,” says C. Nicole Mason, Ph.D., IWPR President and CEO. “A gender-equitable recovery requires that we ramp up protection of workers’ rights.

**The new study uses data from a national survey of U.S. workers collected between Fall 2017 and Fall 2018. The survey was restricted to full-time employees aged 18 and over who were not self-employed, with a total sample of 4,262 valid responses.