Washington, D.C. – A new report from the Institute for Women’s Policy Research shows that a disproportionate number of young women (ages 16 to 24) worked part-time involuntarily and earned low wages a decade into the economic recovery from the Great Recession. In 2019, two-thirds (68.5%) of young women earned less than $15 per hour, compared to 58.6% young working men, 27.1% women aged 25 to 64, and 17.3% prime-aged men.

Heavy concentration in service and retail industries where job quality has been on the decline undermined young women’s economic security and rendered them vulnerable to job losses induced by the pandemic. Author Shengwei Sun argues that the inadequate recovery from the Great Recession—as characterized by the growth of low-wage, part-time jobs—restricted opportunities of good jobs for entry-level workers and paved the way for the “she-cession” induced by the COVID-19 pandemic.

The growth of low-wage, low-quality work has made it difficult for young people to gain a foothold in the labor market, affecting their long-term economic outlook and transition to adulthood. Young women not enrolled in school, especially young women of color and those with lower levels of education, have borne the brunt of an inadequate economic recovery.

“In the decade since the Great Recession, we have seen an explosion in the growth of jobs in sectors dominated by women—service, leisure, hospitality—and not surprisingly, these sectors also saw enormous losses during the COVID-fueled economic downturn,” said C. Nicole Mason, President and CEO, Institute for Women’s Policy Research. “Compared to men, women earned less and were more likely to hold part-time employment.”

“To ensure an equitable and even recovery, we must target sectors hit hardest during the economic downturn and make sure that women earn wages that allow them to support their families and have paid sick and family medical leave,” she said.

“With another class of high school and college graduates entering the workforce now, we know those young women should be making more than they are and that they should have better jobs,” said IWPR’s Shengwei Sun. “High numbers of early-career young women toiling in insecure, low-wage jobs not only impacts their economic security down the road—it also has long-term implications for gender inequality.”

Many of the policy prescriptions that will help young women are included in the Biden administration’s infrastructure proposal. To create a strong foundation for young workers to thrive in the years to come, recovery efforts should not only address unemployment but also focus on enhancing job quality, strengthening collective bargaining, and expanding equitable outcomes. 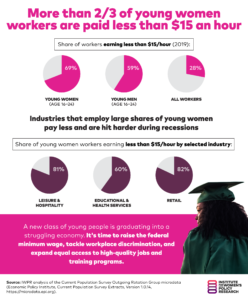