Washington, DC – This month’s jobs report from the Bureau of Labor Statistics (BLS) confirms substantial growth, with 405,000 new jobs on payroll for women (47.6% of 850,000 total). Yet, women’s jobs on payroll are still 3.8 million below pre-COVID-19 level, a greater number of jobs still missing than for men (3 million fewer jobs).

“We are headed in the right direction and will see more job gains in the fourth quarter of the year for women when schools fully re-open,” said C. Nicole Mason, IWPR President and CEO. “There is still much work to be done, especially for women who have been unemployed for 27 weeks or more and in women-dominated sectors, such as child care and travel and leisure.”

The recovery has yet to reach everyone. The Institute for Women’s Policy Research analysis of the BLS data shows that long-term unemployment—of 27 weeks or more—increased for women across racial and ethnic groups, with women’s long-term unemployment growing by 151,000, twice as strongly as men’s (76,000). Almost four in ten (38.7%) unemployed women have been out of work for at least 6 months, compared with 40.5% men.

IWPR analysis of the new jobs data also shows an increase in unemployment for adult women across racial and ethnic groups from 5.4% to 5.5% (unchanged for adult men at 5.9%).

“Unemployment, particularly long-term unemployment, continues to be a big challenge,” said IWPR’s Ariane Hegewisch. “Cutting unemployment benefits, as threatened by 22 states, is only going to deepen the economic devastation faced by many families.” 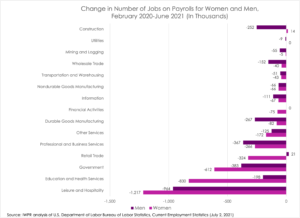 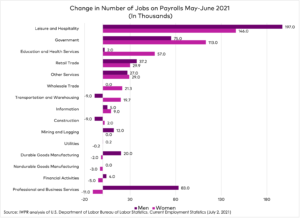 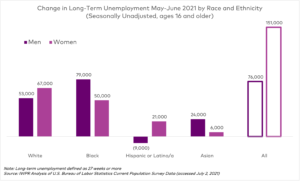 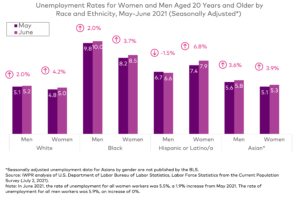