Washington, D.C. – A new study, Out of Work, Taking on Care: Young Women Face Mounting Challenges in the “She-cession” from the Institute for Women’s Policy Research shows that longstanding inequities in access to quality jobs and affordable care, along with uneven caregiving responsibilities, create unique challenges for young women of color in the pandemic recession.

Young women (aged 16 to 24) lost more than a third of jobs between February and April last year, largely due to their concentration in industries and occupations that have been hit the hardest by the economic downturn.

The pandemic hit young women of color especially hard. Compared with young white women, young Latina and Black women not only suffered higher levels of pandemic unemployment, they – along with young Native American women – also experienced a sharper increase in being disconnected from both school and employment.

Young women across racial and ethnic groups are more likely than their male peers to identify care responsibilities as the main reason for not working for pay during the pandemic. The share of young Black and Latina women not working for pay due to care responsibilities (13.1 percent and 11.5 percent, respectively) are the highest among young adults.

“Targeted job creation programs and the inclusion of younger workers in relief efforts will be critical to these on-ramping workers who are early in their careers and may also have caretaking responsibilities,” she said.

“There will be long-term impact on gender inequality if we don’t support young women,” said IWPR’s Shengwei Sun, author of of the policy brief.

The report includes both short term responses and long term solutions including the need for: 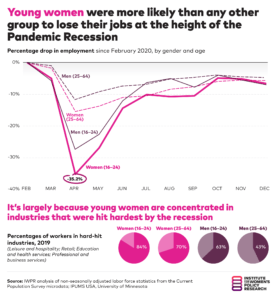 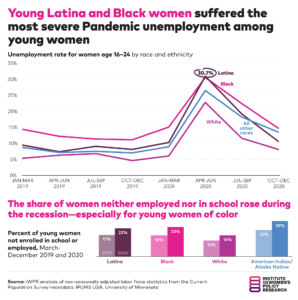 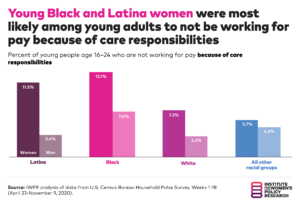