IWPR surveyed more than 1,400 women in both February and March 2021 and found:

“Working mothers and caregivers had a difficult time during the Pandemic, juggling childcare and full-time work,” said IWPR’s president and CEO C. Nicole Mason. “It is time to create systems and workplaces that support women, allow them to advance in their careers, and sustain employment,” she said. “This year Breakfast in bed won’t cut it.”

“President Biden’s proposals in the American Family Plan will go a long way towards building a fair, more equitable economy for families. It will also save families across the country more than $957 Billion dollars over a ten-year period on childcare.”

IWPR’s Jeff Hayes analyzed the survey data and said the data shows, “As the nation turns to recovery, it is vital that women have the necessary supports to re-enter the workforce and sustain employment, provide for their families, and access high-quality and affordable childcare.” He noted that working women and mothers have been disproportionately impacted by job and income losses since the start of the pandemic. Compared to men, they are more likely to have lost jobs in the hardest-hit sectors and shoulder most of the caregiving responsibilities in families. 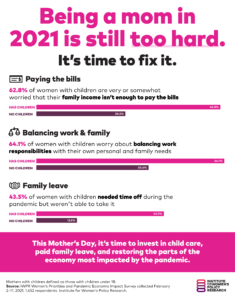