Washington, DC — This month’s jobs report from the Bureau of Labor Statistics was not the present millions of women wanted for Mothers’ Day. The number of women who hold jobs fell by 83,000 while the number of men with jobs increased by 154,000.

This disappointing report shows that more women continued to exit rather than enter the workforce: 165,000 fewer women had jobs or were actively looking for work in April than in March. The number of men in the labor force increased by 355,000. While new Employment Situation data for April from the BLS shows a marginal improvement the rate of unemployment for adult women from 5.7% to 5.6 %, this reflects women giving up on job search rather than real improvements in employment. Black and Hispanic women continue to be particularly severely impacted by unemployment. Black women’s rate of unemployment is 1.8 times higher than White women’s (compared with 1.7 times in March), and Hispanic women’s 1.6 times higher.

Hispanic women’s rate of unemployment increased by 0.2 percentage points (from 7.3% to 7.5%). Black women’s unemployment is highest among women and decreased only marginally (from 8.7% to 8.6%).

“We were hopeful that the economy was on an upswing and would see significant employment gains. Unfortunately, this was not the case. Women’s unemployment remains unchanged signaling the need for investments in job creation in hardest hit sectors and childcare,” said C. Nicole Mason, Institute for Women’s Policy Research (IWPR) president and CEO. “Women of Color, Black and Latina women specifically continue to be disproportionately impacted by job losses and long-term unemployment, she added.

“The economy cannot re-start itself.” said IWPR’s Ariane Hegewisch. “It’s like a wheelbarrow. Government investment is needed to give it a push.” 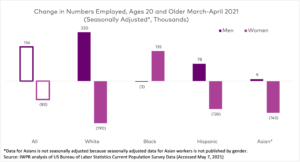 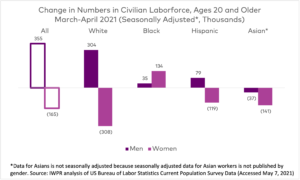 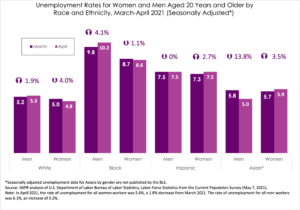