Statement from Institute for Women’s Policy Research (IWPR): Women continue to be disproportionately affected by the COVID 19 pandemic as they remain 6.1 million jobs below pre-COVID levels from February, despite making a gain of 800,000 jobs compared with men’s 600,000 new jobs since July. Adult women retain a higher unemployment rate than adult men (8.4 percent vs. 8.0 percent). In addition, we are seeing a continued strong adverse impact of unemployment on race and gender:

Throughout this ‘she-cession‘, women’s rates of unemployment have been worse than men’s because job loss has been particularly severe in sectors such as Leisure and Hospitality, Retail, and parts of Health and Education services where women are the majority of the workforce, and which disproportionately employ Black and Hispanic women.

The lack of recovery of ‘Child Care Services’ illustrates the difficulties for many working mothers as the economy slowly recovers. Employment in child care services declined between July and August, and while employment overall is back at 92.4 percent of February levels, in Child Care services it still is at only 79.4 percent. 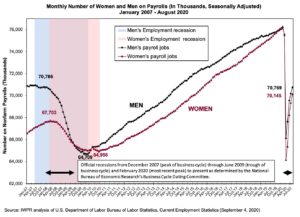 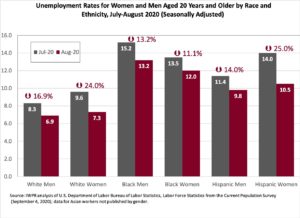