Home/Media/Press Releases/Americans Are Getting Back to Work, but Job Growth is Twice as High For Men Than For Women, and the Gender Jobs Deficit Widens
Previous Next

Washington, DC — While new Employment Situation data for March from the Bureau of Labor Statistics shows a 315,000 increase in women’s jobs on payroll (34.4% of all added jobs), IWPR analysis of BLS data shows that the job growth is nearly twice as large for men than for women. Women still need 4.6 million more jobs to get back to pre-COVID-19; men still need 3.8 million.

Men gained more jobs than women in almost all sectors, including in Leisure and Hospitality and Government – the sectors with largest job changes, and with a pre COVID-19 workforce that was predominantly female. In Financial Activities, women’s jobs on payroll declined (by 8,000) while men’s increased (by 24,000).

“Americans get back to work, but the recovery is not reaching all Americans,” said C. Nicole Mason, PhD, president and CEO of IWPR. “The unemployment rate for Black women and Latinas is still unacceptably high,” she added.

And while unemployment fell, the number of workers 16 and older who have been unemployed for 27 or more weeks increased for women – by 92,000 – while it decreased for men, by 34,000. Black women’s long-term unemployment increased by a disconcerting 54,000, and White women’s also grew, by 20,000.

“The strong job growth is very encouraging, but the widening gender gaps in the recovery, and the fact that women’s long-term unemployment has continued to grow, is worrying.” said IWPR’s Ariane Hegewisch. “She noted that once again, there was hardly any growth in employment in the childcare sector (by just 0.2 percent), and that childcare employment is still far below where it was in pre-COVID. “Without childcare, it will be very hard for women to come back to work on an equal basis with men.”

“As the numbers improve, this is a reminder that the recovery is not done until all Americans benefit,” said Mason. “These data show the support for working families in the Infrastructure package is sorely needed and needs to be enacted to reach kitchen tables and pocketbooks,” she said.

Women’s job losses have been compounded by racial and ethnic differences, and Black women have faced the highest rate of unemployment among women at 8.7 percent, followed by Hispanic women at 7.3 percent.

Asian women saw a drop in unemployment, by 5 percent (from 6% to 5.7%, seasonally unadjusted data). White women’s unemployment decreased slightly, from 5.2 to 5 percent 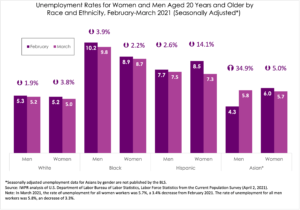 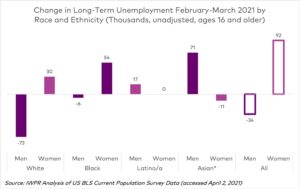 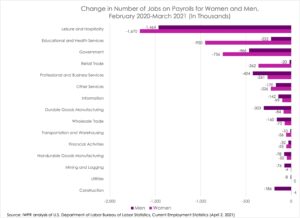