Women account for a third of the nation’s lawyers and doctors, a major shift from a generation ago when those professions were occupied almost exclusively by men, new Census figures show.

Women’s share of jobs in the legal and medical fields climbed during the past decade even as their share of the overall workforce stalled at slightly less than half. Women held 33.4% of legal jobs—including lawyers, judges, magistrates and other judicial workers—in 2010, up from 29.2% in 2000. The share of female physicians and surgeons increased to 32.4% from 26.8% during that time. 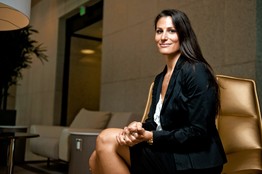 Miami lawyer Lindsey Lazopoulos says she is focusing on her career.

“That’s very significant progress,” said Heidi Hartmann, president of the Institute for Women’s Policy Research, a nonprofit group in Washington. “In the midst of a lot of evidence that women’s progress has plateaued, nevertheless we can see that women are still making progress in some very professional, high-wage fields.”

Women’s gains in these fields follow the rise in their professional school enrollments over time. Harvard Law School, for example, was closed to women until 1950, and the Washington and Lee University School of Law was the last U.S. law school to open its admissions to women in 1972, according to research by Hannah Brenner and Renee Newman Knake of Michigan State University’s College of Law. Today, women graduate from law school in roughly the same numbers as men. They make up just under half—45.4%—of medical residents and fellows, or medical-school graduates in training, according to the American Medical Association. 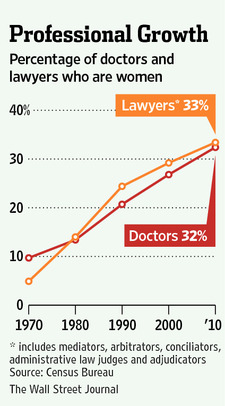 Lindsey Lazopoulos represents the generational shift in women’s career aspirations. The 26-year-old Miami resident said earlier generations in her family of Greek heritage believed women were meant to stay at home and raise children. While Ms. Lazopoulos was growing up, her mother didn’t work.

But her parents emphasized the importance of getting an education to achieve a middle-class lifestyle. Ms. Lazopoulos earned a bachelor’s degree in American history at Columbia University. During school, she worked part-time at a Manhattan law firm, “feeding off the energy” of assisting on big cases, she said. “I really liked the environment: very intense and high-powered.”

She graduated from the University of Miami School of Law last year and now is a commercial litigator. Two partners in the Florida firm where she works are mothers raising children, she said. Ms. Lazopoulos said she isn’t focusing on raising a family yet. “For me, and for other women we’re kind of just trying to get a start on our careers and focus on that,” she said.

Despite women’s greater presence in law and medicine, wage gaps between men and women persist in both fields. In 2007, the median income—the point at which half earn more and half earn less—of female lawyers was $90,000, compared with $122,000 for male lawyers, according to research by Harvard economists Claudia Goldin and Lawrence Katz. The median income of female physicians was $112,128, compared with $186,916 for male physicians. Those differences are largely explained by individual choices, including women taking off time to raise children or opting for less-demanding career tracks or positions that pay less, said Mr. Katz. But a small portion of the gap exists for unclear reasons, he said. Discrimination could also be a factor, though it isn’t clear how much, he said.

Ms. Goldin said women’s gains in medicine have coincided with the rise of corporate-owned hospitals and medical practices, in many cases making it easier for women to balance work and family. Health-care companies have bought up many small, previously male-owned independent practices and raised women’s wages closer to men’s, while offering more flexible work schedules, Ms. Goldin said.

“The corporate sector in some sense has been a great equalizer” for women in medicine, Ms. Goldin said.

While women have made strides in the legal profession, at law firms few are taking management positions. Some leave for jobs as counsel to corporations, where hours can be more predictable. At large law firms, women make up just 15% of equity partners, according to a survey released in October by the National Association of Women Lawyers. Of the 200 firms surveyed, just 4% had a woman at the helm in the role of firm-wide managing partner.

Ida Abbott, 65, a lawyer in Oakland, Calif., said biases against women were “overt” in 1975, when she graduated from the University of California Hastings College of the Law and started looking for jobs.

“People would say directly, ‘You can’t be a lawyer because you’re a woman, women are too emotional, their voices are too high,… they aren’t tough enough,’ ” said Ms. Abbott, who advises law firms on talent development..She She said women still face barriers to leadership jobs at firms, because advancement is largely based on hours worked. “You’re really trying to break into an established network, coming at it from the perspective of the woman, when most of the structures are designed by men,” she said.

Ms. Knake, a Michigan State University associate law professor, said while women graduate from law school in roughly the same numbers as men, many women leave the field for careers that offer more flexibility in hours and location, she said.

“As much as it’s good to see the progress,” Ms. Knake said, “I still remain troubled that we don’t see a lot of our law graduates staying in the profession.”

—Jennifer Smith contributed to this article.