Why Do Bosses Want Their Employees’ Salaries to Be Secret?

Home/Media/Press Hits/Why Do Bosses Want Their Employees’ Salaries to Be Secret?
Previous Next

Why Do Bosses Want Their Employees’ Salaries to Be Secret?

According to a 2003 study, “Over one-third of private sector employers…recently surveyed admitted to having specific rules prohibiting employees from discussing their pay with coworkers. In contrast, only about 1 in 14 employers have actively adopted a ‘pay openness’ policy,” which explicitly protects workplace discussion of wages. A 2011 survey estimated that 50 percent of workers are subject to some kind of restriction on discussing their pay with coworkers—slightly more women than men, with the largest concentration among private sector workers (about 60 percent, compared to less than 20 percent of public workers). The gaps vary along demographic lines: women workers, single parents and married childless women tend to face higher rates of these secrecy controls than do married mothers. And although civil servants generally had far lower rates of pay secrecy, the practice was more prevalent among women in the public sector. 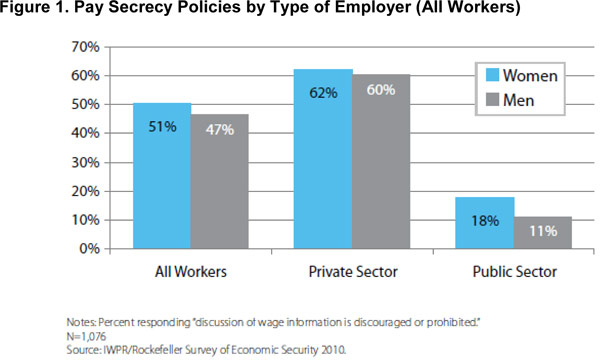 Many of these workers will never even know that they’ve unfairly benefited from or suffered from unequal pay. Ultimately, the big winner in this game of secrecy is the boss, who profits directly from the ignorance and pliability of workers who don’t grasp their own economic situation.