Status of Women in the Swing States: North Carolina

Home/Media/In the Lead/Status of Women in the Swing States: North Carolina
Previous Next

Status of Women in the Swing States: North Carolina

IWPR has been exploring women and the political landscape by looking at the status of women in swing states. This series leading up to the election looks at policies that support working women and families, and the bold policy changes that are needed to support a holistic and equitable recovery from COVID and the recession.

Women will be among the most important voting demographics in North Carolina. Women in the United States make up the majority of registered voters and vote at higher rates than men. This holds true in North Carolina; in the 2018 election, 66.7 percent of North Carolina women were registered to vote 50 percent voted. This matters because women prioritize different issues than men, issues such as health and education. In the context of the upcoming election, the COVID-19 pandemic, struggling economy, and school and childcare center closures have negatively informed many women’s views of the Trump administration. Though 50 percent of voters in North Carolina chose Trump in 2016, according to a September poll by the Guardian, Biden holds a 1.4 percentage point lead over Trump.

While women represent a powerful force in the electorate, the continuous redrawing of state districts and the new wave of recently passed state voter identification laws have raised concerns that these laws will negatively impact the election process and prevent women and racial and ethnic minorities from participating. 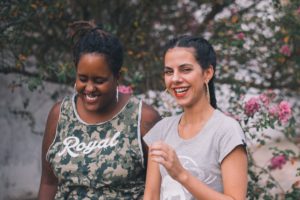 Like most states, North Carolina should focus on ensuring safe voting conditions, recruit more women to run for office and higher office, and institute polities that will address the structural barriers women face when trying to run and serve in elected office. See the Status of Women in North Carolina: Political Participation for more information.

Poverty and Opportunity: North Carolina received a D+ grade for women’s poverty and opportunity in the 2018 Economic Status of Women in the States. More women are earning bachelor’s degrees and women’s entrepreneurship is growing rapidly, but improvements have not reached all women. An astounding 17.4 percent of North Carolina women aged 18 and older live in poverty, placing the state among the bottom third in the country. Expanding health care access through Medicaid, increasing opportunities for educational attainment for women of color, and increasing access to startup capital and government contracts for women business owners would all serve to promote women’s economic security. Read our report The Status of Women in the States for more information.

Work and Family: Pre-COVID women made up almost half of the workforce. Few families, however, have someone who can take time off work to take care of health emergencies, act as the primary caregiver for children, or take an elderly parent to a doctor’s appointment. In our most recent report, North Carolina received a grade of D+ for the Work and Family indicator, ranking 35th of 51 states and DC. By promoting increased childcare, eldercare, and paid leave benefits, North Carolina could relieve some of the challenges associated with caregiving while simultaneously allowing more mothers into the workforce.

Reproductive Rights: The ability to decide whether and when to have children is essential to the social and economic well-being and overall health of women. More than 43 percent of North Carolina women aged 15 to 44 live in a county without an abortion provider. Additionally, North Carolina requires women who seek an abortion to attend a mandated counseling session designed to discourage abortion and to wait 72 hours after the session before obtaining an abortion.

North Carolina has one of the highest infant mortality rates in the country, ranking 41st of 51 among all states and the District of Columbia. Women in North Carolina are also slightly more likely than women nationally to give birth to babies with a low birth weight (9.2 percent compared with 8.2 percent). HIV/AIDS diagnoses and reported gonorrhea cases also decreased, but chlamydia rates increased. Expanding access to full reproductive health services, including preventative and well-women visits, will help increase the economic security of North Carolina women. Please read the Status of Women in North Carolina: Health and Wellness for more information.