Apprentices make up the next generation of skilled tradespeople to build and maintain the infrastructure of our nation. Apprenticeships in the trades are great pathways into high-earning careers for women, offering the opportunity to earn while gaining a valuable trades credential. Union apprenticeships, in particular, provide a debt-free pathway to careers with earnings much higher than in traditionally women-dominated professions that similarly don’t require a college degree.

To mark National Apprenticeship Week (November 15 to 21), IWPR launches its new report on the promise—and the problems—for women in the trades. The report is based on survey responses of about 600 women apprentices in the trades, and over 2,600 tradeswomen altogether.

From 2016 to 2019, the number of women apprentices in the construction trades increased by 57.7 percent. This growth is at least partly due to federal programs such as the U.S. Department of Labor Women’s Bureau’s WANTO grants and Apprenticeship Diversity grants. Unfortunately, growth is from a low baseline. In 2019, women were only 3.6 percent of all construction trade apprentices, and Black and Latina women just 0.7 and 0.6 percent, respectively.

The results of IWPR’s 2021 Tradeswomen’s Retention and Advancement Survey show that the challenge for improving gender diversity in construction apprenticeships is retention as much as recruitment. More than four in ten (42.8 percent) women apprentices who responded to the survey reported that they have seriously considered leaving the trades.

While most women apprentices reported equality in the classroom (71.5 percent), just over half reported that they are always or frequently treated equally during on-the-job training (54.0 percent) or during work assignments (51.6%), and fewer than half (48.9 percent) report equity when it comes to layoffs. 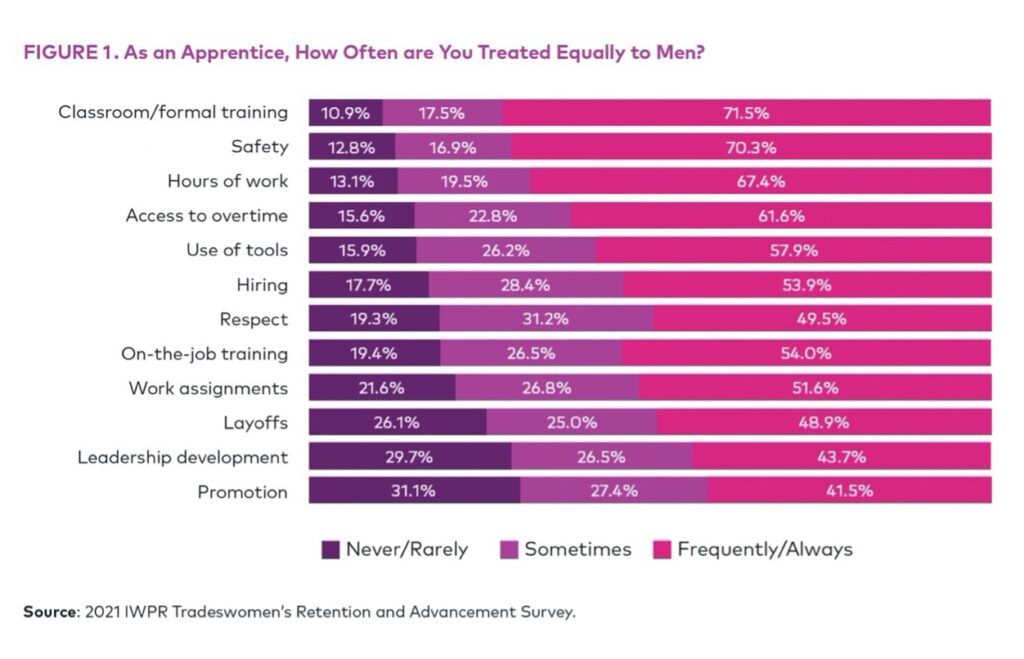 Equal treatment in the formal classroom setting is great news—it means that top-down equity goals, oversight, and recruitment of women instructors is working. Yet, that classroom training is of limited use if apprentices do not have the opportunity to practice their skills, use the tools, and get the hours they need to move through their apprenticeship. Apprentices in the survey describe how White men are given the opportunity to learn while women, particularly women of color, never get the chance. As one woman explained, “I’m treated very differently from my male coworkers. As a fourth year [apprentice], I was told to pick up trash while the first years were allowed to work.”

The most common reason provided by women apprentices for seriously considering leaving the trades is harassment and lack of respect, rated very important by more than half or respondents (50.6 percent).

Apprenticeships are a considerable investment for both the industry (average annual costs per apprentice are estimated at $8,000 to $10,000) and the apprentice. With increasing demand for qualified workers, the industry can’t afford to lose apprentices to toxic and discriminatory workplace culture.

It’s clear that change is needed. Intentional to recruit and retain a more diverse workforce, including mentorship and community supports, harassment-free workplaces, oversight and measurement of meaningful diversity and inclusion initiatives, and work-family policies, can help the industry build on current momentum.

States with targeted initiatives to promote diversity in apprenticeships—like Massachusetts (home of Secretary of Labor Marty Walsh), New York, Washington, and Oregon—show that it is possible to make progress.

Interview with Eve Mefferd about the report on 2022 International Women’s Day here: https://www.youtube.com/watch?v=StJRDEoekiU&t=1108s&ab_channel=TexasWomeninTrades