IWPR Grows its Staff and Impact, Building on Major Accomplishments this Year

Home/Media/In the Lead/IWPR Grows its Staff and Impact, Building on Major Accomplishments this Year
Previous Next

IWPR Grows its Staff and Impact, Building on Major Accomplishments this Year

Stephanie Osborn joins the Institute for Women’s Policy Research as its incoming Chief Operating Officer. Ms. Osborn joins IWPR from the National League of Cities where she served in a similar capacity.

She is joined by a talented slate of new researchers with deep content expertise on issues ranging from Higher Education to Retirement Security to Childcare. They include Reproductive Rights expert and leader Christine Clark who will stand up IWPR’s Center for the Economics of Reproductive Health, Research Economist Martha Jaimes, PhD, Afet Dundar, PhD, Research Associate Miranda Peterson, and Senior Research Associate Jennifer Turner, PhD who will support our Student-Parent Success Initiative.

IWPR new staff will build on the important work and accomplishments of this past year, including our first ever Power + Summit in San Francisco, California which brought together thought leaders from across the country including New York Attorney General Letitia James, legendary women’s basketball coach Dawn Staley, and advocate Cecile Richards to accelerate women’s Power and Influence in society. IWPR also hosted a research conference in partnership with American University on building a robust U.S. childcare infrastructure and released 24 original research reports and briefs.

“I look forward to rolling up my sleeves and building the infrastructure and staff community necessary that will allow IWPR to thrive and meet its mission.” -Stephanie Osborn, IWPR Chief Operating Officer 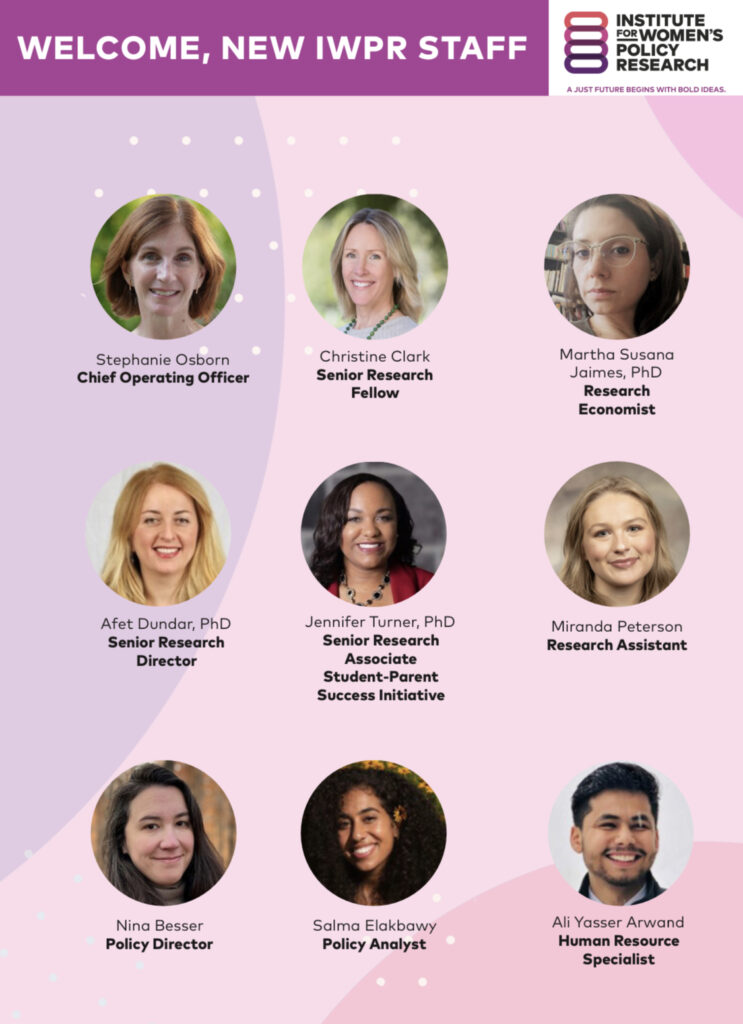