Equal Pay Day 2021: The Results of a COVID-Impacted Economy

Home/Media/In the Lead/Equal Pay Day 2021: The Results of a COVID-Impacted Economy
Previous Next

Equal Pay Day 2021: The Results of a COVID-Impacted Economy

For many women, this Equal Pay Day feels uniquely urgent. While it looks like the wage gap is shrinking – that’s only because women in low wage jobs have been pushed out of the work force during the Covid-19 pandemic and the economic downturn in its wake. 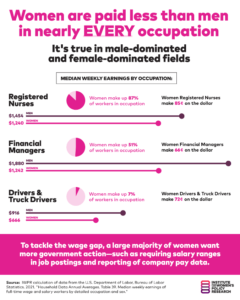 A new analysis from the Institute for Women’s Policy Research (IWPR), along with highlights from a new national IWPR survey, shows that women want and need the government to do more to close the gender wage gap.

Today, IWPR CEO and President C. Nicole Mason is testifying before the House Oversight Committee along with other Equal Pay champions. In the wake of the economic downturn, lawmakers are beginning to consider what can be done to propel women into higher paying jobs.

This fact sheet on the gender wage gap by occupation race and ethnicity provides the first data on COVID-19’s impact on the gender wage gap. The wage gap narrowed, but due to growing inequality rather than progress for women. Women’s average earnings increased more than men’s because lowest paid women were the most likely to lose jobs during the COVID-19 shecession – and are no longer counted in the average women’s weekly median earnings. As a result of the missing lowest-paid women, the gender wage gap narrowed, between all women and men, and between women and men by race and ethnicity. 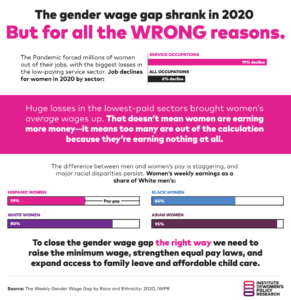 Without intervention, women will not reach economic parity with men until 2059. For women of color, it will take more than a century: 2130 for black women and 2224 for Hispanic women. AAPI women also earn less than White men in all but one state.

“Women — especially Black and Latina women — need bold and immediate action to help them weather the pandemic and re-enter the workforce. But that’s just a start,” said C. Nicole Mason, IWPR President and CEO. “We need a $15 minimum wage, increased care infrastructure spending and child care support to repair the economic damage from this pandemic and rebuild the economy in a more equitable way.”