The December 2021 jobs report provided a mixed picture, with only moderate jobs growth, a continued lag of women’s jobs recovery behind men’s, and another month with an absolute drop in child care and elder care jobs—while jobs in the overall economy grew. As last month, survey data from individual households (Current Population Survey) is much more positive than survey data collected from establishments about the number of workers on payroll (Current Employment Situation). Household data suggests that the rate of unemployment fell for all but Black women, who saw an increase in their rate, and that employment grew strongly for women overall, but declined slightly for Black women.

Data were collected during the second week of December, before the spread of the Omicron variant. Next month’s jobs report, which will mark the first of 2022, will likely show a more complete snapshot of the latest COVID surge.

For IWPR analysis of the December jobs report, see below.

December #JobsDay data shows another month with a split in data from employers’ payrolls and individual households. Women’s numbers on non-farm employers’ payrolls increased by 47,000—less than a quarter (23.6 percent) of the 199,000 payroll jobs that were added. However, survey data collected from individual households point to a more optimistic picture, with women’s employment having grown by 575,000 in December, 88.3 percent of employment growth of 651,000. (As the BLS  explains, these discrepancies partly reflect difficulties with data collection during the COVID-19 pandemic).

December’s payroll data show that women were still 2.1 million jobs behind while men were 1.5 million behind pre-COVID-19 payroll numbers in February 2020 (Figure 1). Gender differences in the recovery are becoming baked in as COVID-related uncertainties continue.

December data also point to strong gender differences in payroll job change by industry. There were 4,000 fewer women on payrolls in leisure and hospitality sector compared to November, while the industry saw an increase of 57,000 men. Likewise, women’s numbers declined in the transportation and warehousing industry, while men’s jobs increased by 21,500 (Figure 2).

Women saw the strongest gains in Education and Health Services—19,000 more jobs while the number of men on payrolls declined by 9,000. In professional and business services, jobs grew for both women and men—by 9,000 and 34,000, respectively (Figure 2). 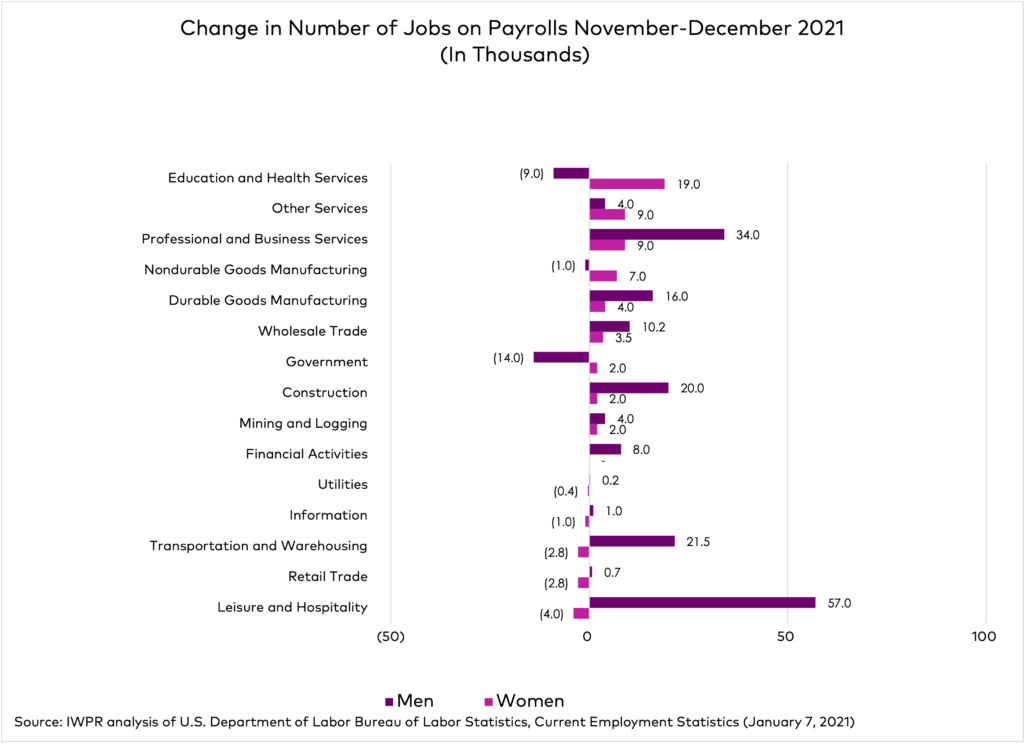 In December, once again the gap in the recovery to pre-COVID-19 jobs levels widened between the overall economy and the child care and elder care sector. Jobs on payrolls in nursing, mental health, community care, and child day care services saw a slight decline. Jobs on payroll in these industries were still 12.0 percent lower than pre-COVID-19, while all jobs in the economy were just 2.3 percent below that level (Figure 3).

Without quality care and quality care jobs, many women will not be able to return to work. Women, and families, need investments to rebuild the care infrastructure and provide care jobs that pay a living wage. 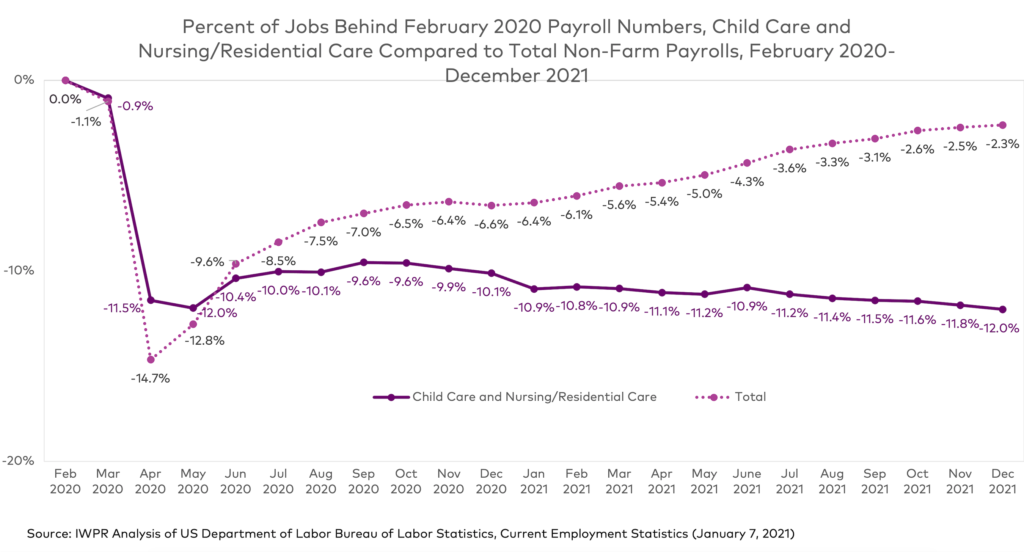 Employment data point to continued gender and racial differences in the recovery. Unemployment rates for all adult women fell from 3.9 to 3.6 percent, almost reaching pre-COVID-19 levels of 3.5 percent in February 2020. Yet, while the rate of unemployment fell for  adult White (3.7 to 3.1 percent), Latina (5.3 to 4.9 percent), and Asian women (3.9 to 3.3 percent, not seasonally adjusted), it increased for Black women, from 4.9 to 6.2 percent (Figure 4). Likewise, the number of employed adult Black women fell by an estimated 8,000 while the number of employed White women grew by 463,000, the number of employed Latinas by 151,000 and Asian women (seasonally unadjusted) by 86,000 (IWPR analysis).

Figure 4. Adult Black Women Are the Only Group to See an Increase in Unemployment Rate in December 2021 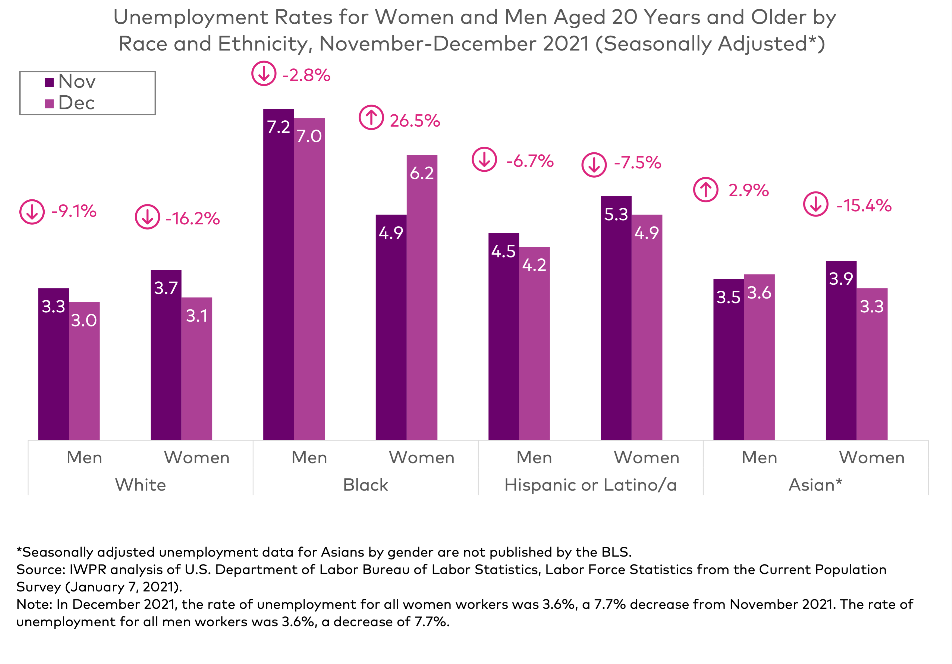