Experiencing workplace sexual harassment carries an emotional burden that’s impossible to adequately quantify—it’s a harsh and sometimes violent misuse of power that can leave lasting psychological trauma for those who experience it.

A new report from the Institute for Women’s Policy Research and TIME’S UP shows that the costs of sexual harassment don’t end there. For the individuals in the report, economic consequences added up over time can culminate in lifetime costs as high as 1.3 million dollars (see infographic below). Costs include lost wages and benefits, medical and psychological treatment fees, tuition fees for retraining, and other damages to the individual’s personal finances. Gabriella’s story illustrates the true meaning of these costs:

Gabriella had just received a wage increase and promotion to shift leader at a fast-food restaurant when she was sexually harassed by a coworker. She turned to her managers for help but was instead threatened and discouraged from making a formal report. Her boss started reducing her hours bit by bit in retaliation for speaking out. After a month, her boss had stopped scheduling her to work.

Even before the harassment, her minimum wage income meant that making rent on the apartment she shared with her mother could be difficult. She had no savings to fall back on, and now she couldn’t afford to pay rent at all. She and her mom were evicted and charged late fees for the credit card and rental payments that they owed. She was homeless, sleeping on friends’ couches until she made enough money to pay rent again.

Gabriella found a new food service job, but it paid about a dollar less per hour than she had been making before. On top of reduced earnings, the trauma of sexual harassment and housing insecurity caused extreme stress, long-term anxiety and PTSD, and the need for medication. She also had to pay a lawyer to help prevent serious harm to her credit score due to unpaid rent. All told, Gabriella experienced $126,000 in financial costs on top of immeasurable psychological damages—repercussions that will have a ripple effect across her entire lifetime. 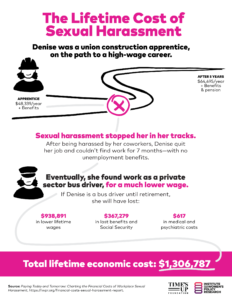