The Status of Women In North Carolina: Political Participation

The Status of Women In North Carolina: Political Participation

The equal participation of women in politics and government is integral to building strong communities and a vibrant democracy in which people of all genders can thrive. Women engage with the political process in a number of ways, from registering and voting, to running for local office, to supporting and working for campaigns, to running for a seat in the U.S. Congress or the Presidency. The participation of women in politics helps ensure that a broad range of issues are covered and addressed in government. While women constitute a powerful force in the electorate today and inform policymaking at all levels of government, women continue to be underrepresented at all levels and face barriers that often make it difficult for them to exercise political power and assume leadership positions in the public sphere. Covid-19 may also affect women’s ability to participate fully in the electoral process, as the pandemic has raised concerns about people’s ability to vote safely and securely.

The Status of Women in North Carolina: Political Participation presents data on several aspects of women’s involvement in the political process in North Carolina, comparing North Carolina to other states and the United States overall. The report provides data on voter registration and turnout, female state and federal elected and appointed representation, and state-based institutional resources for women. It examines how women fare on these indicators of women’s status, the progress women have made and where it has stalled, and how racial and ethnic disparities compound gender disparities in specific forms of political participation.

This Political Participation report is the third installment in a four-part series of publications on women’s status in North Carolina commissioned by the North Carolina Council for Women and Youth Involvement. These reports describe trends over time and, whenever possible, variations among women by race and ethnicity. The first report focuses on employment and earnings; the second on health and wellness; and the fourth on women’s poverty and opportunity. The series is part of the Institute for Women’s Policy Research’s Status of Women in the States initiative, which has sought to measure women’s economic, social, and political progress at the state and federal levels since 1996.

The Status of Women in North Carolina Political Participation 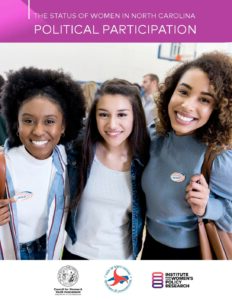