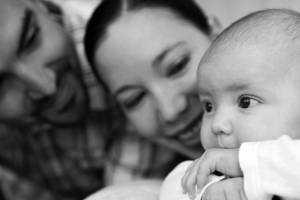 1.  The recent recession was not predominantly a “mancession.”

While men represented the majority of job losses during the recession, IWPR’s research shows that single mothers were almost twice as likely as married men to be unemployed.  Another IWPR briefing paper examines how the “Great Recession” was an equal opportunity disemployer, doubling nearly every demographic group’s unemployment rate. In many families, women increasingly became the primary breadwinner, but they still spent more time in unpaid household labor than men. This imbalance of effort at home persists whether men are employed or not.

2. Only 12 percent of single mothers in poverty receive cash assistance through the Temporary Assistance for Needy Families program.

3. Community colleges would need to increase the supply of child care on campus at least 10-fold to meet the current needs of students.

More than one-quarter of the students at community colleges have children, yet the supply of child care on campus does not meet the current needs of students. For many student parents, community college is an avenue to better jobs that allow them to support their families. As part of IWPR’s current project on post-secondary education, IWPR released a fact sheet in June, which noted that the proportion of community colleges providing on-campus care for the children of students decreased between 2001 and 2008, despite the great need.

4.  Young women are now less likely to work in the same jobs as men.

Reversing the progress made by earlier cohorts of young women entering the labor market, younger women today are now less likely to work in traditionally male and integrated occupations, which tend to pay better than traditionally female occupations. When told that traditionally male occupations pay more, women receiving workforce training said they would choose the higher paying job. In addition, women earn less than men in all but four of 108 occupational categories including in occupations-such as nursing and teaching-where women represent the majority of workers.

5. The majority of all likely voters support paid sick days.

IWPR’s new study shows that, while 69 percent of likely voters-including majorities of Democrats, Republicans, and Independents-endorse laws to provide paid sick days, two-fifths of all private sector workers lack this benefit. IWPR’s research also shows preventing workplace contagion of communicable diseases-such as influenza or H1N1-by providing paid sick days will save employers and the US economy millions of dollars.

Jennifer Clark is the Development Coordinator with the Institute for Women’s Policy Research.