On July 5, Gov. Jay Inslee signed Washington State’s new Family Leave Act (FLA) into law. Starting on January 1, 2020, eligible employees will be entitled to up to twelve weeks of paid, job-protected leave for qualifying family or medical reasons, capped at sixteen weeks of combined family and medical leave, plus an additional two weeks available to mothers who experience pregnancy-related complications.

Washington joins California (2004), New Jersey (2009), Rhode Island (2014), New York (2018), and the District of Columbia (2020) in putting a state-level paid family leave policy in the books. Compared with these existing state paid leave systems, however, Washington’s law has several key features that make it a pioneer on the paid family and medical leave policy landscape.

Below are five ways in which Washington State’s FLA breaks new ground.

In designing their paid family leave policies, California, New Jersey, Rhode Island, and New York were able to build upon the administrative infrastructure of their existing temporary disability insurance (TDI) systems by expanding benefits to cover periods of family care. Because Washington State does not have a TDI system, its paid family leave policy will require the establishment of new administrative architecture and a trust fund for the collection and disbursement of benefits. The new law calls for premiums to be collected starting in 2019, one year prior to when benefits will be available, and for the first two years, premiums have been set at 0.4 percent of an employee’s wages (up to an income limit of around $130,000).[1] Thereafter, the state will set premiums based on the balance in the trust fund account. The premiums are currently set to be shared between employees and employers, with employees paying 63 percent of the premiums and most employers covering the remaining 37 percent.

Washington’s law provides lower income workers with a proportionately higher wage replacement rate than higher income workers with the goal of making leave more accessible to all workers.[2] Employees taking leave will receive 90 percent of their wages on earnings at or below half of Washington’s average weekly wage, plus 50 percent of their wages on earnings above Washington’s average weekly wage, up to a maximum benefit (currently set at $1,000/week). This makes Washington State’s family and medical leave payments among the most generous in the country, as existing state programs provide only between 55 percent and 67 percent replacement rates.

Unlike the family and medical leave laws in California, New Jersey, and Rhode Island, eligibility is based on hours worked and not on earnings. The FLA covers all employees in Washington State (with the exception of federal employees) who have worked for at least 820 hours in the last four out of five calendar quarters (about 15 hours per week, on average). In addition, workers who are self-employed may choose to participate in the program as long as they opt in for at least three years. 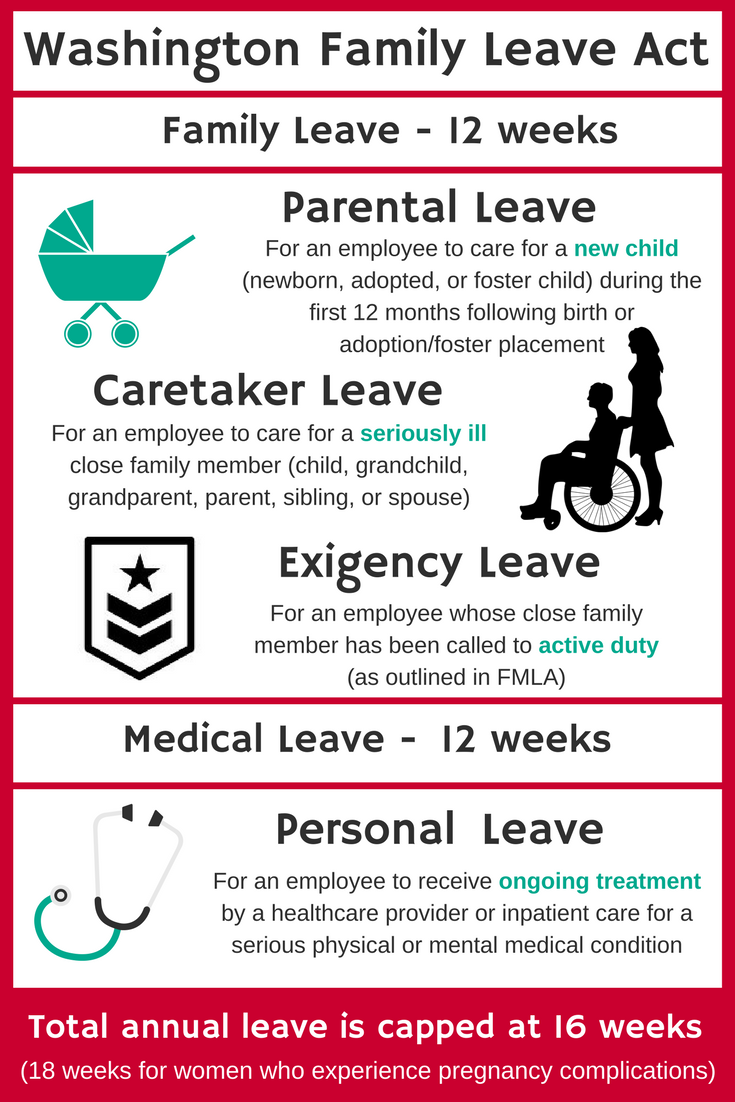 In addition to the twelve weeks of paid family leave provided through Washington’s law, the FLA also provides employees with up to twelve weeks of medical leave, with the total period of benefits capped at sixteen weeks (or eighteen weeks for women who experience pregnancy-related complications). Washington’s law makes it one of the most generous in terms of the maximum length of family leave available. Although California, New Jersey, and Rhode Island allow for significant periods of medical leave under their TDI systems, they guarantee only four to six weeks of leave for family reasons.

The FLA provides job protections that extend beyond the twelve weeks of protection provided by the FMLA: up to the law’s cap of sixteen weeks of combined family and medical leave (or eighteen weeks for women who experience pregnancy-related complications). The law uses the more stringent FMLA requirements for employer size and hours worked for access to job protection benefits, however, which is estimated to exclude about 40 percent of private-sector workers nationally.

As a result, the FLA’s job-protection benefits are only available to employees working for larger employers (50+ employees) who have worked at least 1,250 hours in the last year.[3]

The law also provides additional supports for small businesses. First, employers with fewer than 50 employees are not required to pay the employer portion of the insurance premium, although their employees must make contributions and are eligible for paid leave. Second, if small employers choose to contribute to the fund, they may apply for a grant to assist with the cost of hiring a temporary worker or to cover other wage-related costs associated with employee leave. Finally, employers with 150 employees or fewer may apply for the same grants, all of which are funded by the family and medical leave insurance account.

Washington State’s new Family Leave Act represents an exciting development on the state-level paid family and medical leave policy scene. The law’s independent funding system, the progressivity, generosity, and coverage of its paid benefits, the length of leave available, the additional job-protection benefits provided, and its supports for small businesses make the FLA unique compared with existing state policies. Washington’s decision to implement a paid family and medical leave system in the way that it has, to borrow the words of U.S. Supreme Court Justice Louis Brandeis, will make it a laboratory of democracy for the rest of the country to watch and learn from moving forward.

[1] The wage base limit subject to taxation for Social Security

[2] California is set to adopt a more progressive benefit structure starting in 2018, and the District of Columbia’s leave payments will also be progressive once they are implemented in 2020.

[3] In order to receive job protection under FMLA, employees must work for an employer with 50 or more employees, have worked for her/his employer for at least one year, and have worked at least 1,250 hours in the last twelve months.