Between December 2007 and June 2009, the U.S. economy was in the worst recession since the Great Depression of the 1930s and the aftereffects were felt long after the official end of the Recession.

In 2011, IWPR began publishing regular analyses of the trends in job gains and losses among women and men, highlighting the gender differences in job growth. Its analysis countered the prevailing media narrative of the “mancession,” noting that, while men represented the majority of job losses during the recession, single mothers were almost twice as likely as married men to be unemployed.

As men and women recovered their jobs, IWPR identified a “new normal” in the labor market: a smaller gender gap in jobs following the Great Recession. Prior to the recession, men held several million more payroll jobs than women, but now hold just over one million more jobs than women.

IWPR also analyzes trends in job growth by industry and unemployment rates among men and women color and single mothers.

Black and Hispanic Women Lag in Recovering from the Recession

The Future of Care Work: Improving the Quality of America’s Fastest-Growing Jobs 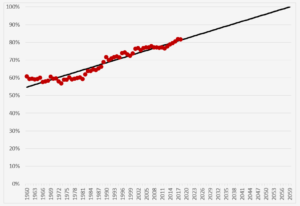 A Woman-Centered Economic Agenda: 8 Policies that Boost the Economy and Work for Everyone

Women Earn Just Half of What Men Earn Over 15 Years

Store closings: Who are the biggest victims of the retail apocalypse

The decimation of “pink-collar” office jobs

American women are working more but “overwork” is holding them back