r. Mariam K. Chamberlain, a founding member of the Institute for Women’s Policy Research and the founding president of the National Council for Research on Women, was the driving force behind the cultivation and sustainability of the women’s studies field of academic research. Throughout her life, Dr. Chamberlain fought discrimination, established new roles for women, and championed the economic analysis of women’s issues. She passed away on April 2, 2013, at 94, just a few weeks shy of her 95th birthday, following complications from heart surgery.

In 1950, Mariam Chamberlain received her Ph.D. in Economics from Harvard University, making her one of the few women of her generation to earn a Ph.D. in the field. In 1956, Dr. Chamberlain joined the Ford Foundation, where she served as a program officer in Economic Development and Administation, and then Education and Public Policy. While at Ford, she spearheaded the funding of the academic women’s research and women’s studies movement; she is said to have provided nearly $10 million in support of new feminist initiatives. Her projects fostered a new analysis of women’s position in society, expanded women’s choices in the university, and supported the development of equality in law. After retiring from the Ford Foundation in 1982, she headed the Task Force on Women in Higher Education at the Russell Sage Foundation. The Task Force’s work culminated in a published volume, Women in Academe: Progress and Prospects. She played a major role in building the academic infrastructure necessary to better understand women’s experiences and inform improved policies for women. In short, she paved the way for organizations like IWPR to thrive, and stocked the research pipeline with skilled women and men who have made important contributions to the study of women and public policy. 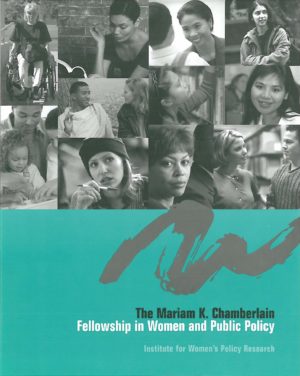 Since 2001, IWPR has offered the Mariam K. Chamberlain Fellowship for Women in Public Policy, which prepares recent college graduates for successful careers in research. IWPR named its Fellowship to recognize the legacy of Dr. Chamberlain’s tireless efforts to open doors for researchers focusing on women’s issues in public policy. The Fellowship has allowed IWPR to expand its research capacity, strengthen its commitment to cultivating the next generation of leaders, and ensure a pipeline of talented researchers and policy experts with knowledge of issues affecting women. To date, 15 young women have gained valuable economic research experience as MKC Fellows at IWPR. Past Mariam K. Chamberlain Fellows currently hold research or policy positions at the U.S. Department of State, SEIU, the Ohio state legislature, and the Pew Center on the States; most pursued doctorate degrees from universities such as Columbia University, Stanford University, The George Washington University, Northwestern University and Brown University; and two will begin their PhD studies in Sociology this fall at Cornell University and the University of Illinois-Chicago.  Rhiana Gunn-Wright, IWPR’s 2012-2013 Fellow, was recently named a Rhodes Scholar, a first for the Fellowship.

In memory of Dr. Chamberlain and her 95th birthday this year, IWPR has received a $95,000 challenge grant from Mary Rubin and the Borrego Foundation to expand the Fellowship Fund. By contributing to the Fellowship fund this year, you not only double your gift with this matching grant, but you help sustain Dr. Chamberlain’s legacy, built on the belief that relying on credible data and research, rather than anecdote and bias, leads to better policies for working women, which in turn contribute to improved long-term outcomes for their families. We are not only launching the next 25 years of making research count for women, but we are also renewing our commitment to cultivating the next generation of women policy leaders.

Add “MKC Fund” to the comments when making your gift on our online donation page. You may also send a check made out the Institute for Women’s Policy Research, with “MKC Fund” in the memo line to:

Questions? Contact the IWPR Development Department at 202-785-5100 or iwpr@iwpr.org